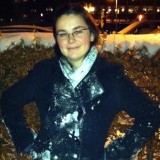 Gamer across many platforms since early childhood. I love to be immersed in worlds from other people's imagination, which is why it's no surprise that I'm an RPG'er at heart. Though I do enjoy a variety of genres... and cakes...


My name is Jenny (unfortunately not a super-hero type name but a sufficient designation) and I live in Denmark but I'm originally from the UK. By day I am a regular girl, with a regular job but when evening comes I put on my robe and wizard hat (sorry couldn't resist it) and get stuck into some gaming.

When I was younger, I spent endless hours invading my older brothers bedroom just to watch him play - never allowed to play of course - just watch... and be the brains behind the situation. I swear, he would never have figured out that he needed to put the magnet above the door to attract the warlords toupee in Superhero League of Hoboken if it wasn't for me! I loved that game, the humor was absolutely golden and it was one of the first (along with Jill of the Jungle and Jazz Jackrabbit) that really got me interested in gaming.

After seeing my love of games, my wonderful Dad built me my first PC. From there I played any game he could get his hands on (luckily not too hard as he worked at a computer shop!). My first utter love was Age of Empires - that game got me hooked indefinitely in the gaming world. Oh the hours I fettered away in that game... let me just say this, whilst saving up for the game itself I continuously played the demo over and over for 2 weeks straight. I adored building my own little empire, watching it bloom and crushing my enemies. I'd try as much as possible to not complete the objective just to let me empire grow and thrive.

I grew to love exploring, building and immersing myself in worlds built by other peoples imagination. Just to see what others could come up with be it in books or in games. This moulded into a love for creativity, my hobbies are based on that; writing (poetry, stories etc.), reading, playing the piano, photography, digital art/drawing and of course gaming. I relish what anyone can come up with when they put their mind to it. I am a firm believer that everyone has a unique story to tell locked up in their imagination, they just have to find the key.

As a lover of worlds I have inevitably been down the MMORPG path. I was there day one for World of Warcraft and the expansions following. I have also played multiple other MMO's since then. World of Warcraft was in fact where I met my Danish fiance and the origin of my tag, AngryMageFace, due to the rather angry looking face on my mage character.

It proceeded to become a nickname in-game and just stuck with me. I love the ongoing universes that MMO's bring and they are a definite trap for me, but I like to explore many different worlds so that helps me to pull myself away.

I own most current and past generation consoles, not a lot of handhelds, but I do indulge in iOS based mobile/tablet games from time to time. My favorite platform has to be the Xbox 360, though I can't entirely explain why, it just seems to call to me above the others. I feel like the whole user experience on an Xbox360 is better than anywhere else and well, my avatar rocks! You can find my work on deviantart;

Genre
I am a sucker for anything that takes me to another world. Doesn't generally matter what kind of world I'm entering, as long as its immersive and expansive. I have to say, current real world stuff/world war games don't usually pique my interest. I'm more for worlds built from imagination.

Series/IP
Mass Effect - Everything about this series embodies what I love. The universe is incredibly rich and there are so many varied stories that can sprout up from this world. The characters are deep, even the side quest characters. There is so much potential for expansion here.

Male character
Alistair from Dragon Age; A classic knight in shining armour! Ok, so maybe he's a little bit dim but damn he's hot, loyal and brave! Just watching him fluster around when approached with anything romantic is adorable.

Female character
Flemeth from Dragon Age; Who wouldn't want to be a kick-ass lady AND a dragon?

What you consider yourself being an expert in when it comes to games
Bioware's RPG stuff has been the best playground for me, so I would say that a good chunk of Bioware RPG games are my area of expertise.

Take a dip into the fantastical worlds of Hohokum! It’s a place to enjoy the view, whilst also challenging you with an array of charming and beautiful puzzles.

Read More
Posted by AngryMageFace in PSV. This post has No Comments.

Can EA bring the noise with their conference? They certainly have an extensive library of kick ass titles to have us on the edge of our seats! Let’s run through the round up and see how it went down.

Read More
Posted by AngryMageFace in Gamescom. This post has No Comments.

November 15th saw the launch of the Playstation 4 in North America, and what self-respecting console launch would be without a midnight launch party? Held in New York City, the city in which the console was first announced, the party was an epic event brimming with both nostalgia and a healthy dose of anticipation as to what the future holds.

Read More
Posted by AngryMageFace in Hardware. This post has No Comments.

Ni no Kuni: Wrath of the White Witch review

Take a deep breath, and get ready to immerse yourself in a world simply brimming with delightful characters, fascinating creatures, diverse and beautiful environments – not to mention an emotional roller-coaster of a story. Ni no Kuni‘s main protagonist – Oliver – is a boy who, unlike his JRPG protagonist brothers/sisters, isn’t full of vengeful […]

Read More
Posted by AngryMageFace in PS3. This post has No Comments.

So, after settling in under my duvet on the sofa, and booting up the Dead Space 3 demo, my honest first impression when met with the incredible visuals of Tau Volantis was simply “Wow”, without even taking a step. Swiftly followed by a sense of unease, and I don’t mean the kind of unease that […]

Read More
Posted by AngryMageFace in Blogs. This post has No Comments.

PS Vita: Now with PlayStation Plus!

Read More
Posted by AngryMageFace in Hardware. This post has No Comments.

ZeniMax Online Studios have released a 10 minute gameplay video with developer commentary giving sparse, basic details about their upcoming MMORPG – The Elder Scrolls Online. First look details splashed out earlier in the year, in Game Informer’s June cover story, reveals that The Elder Scrolls Online will open up most of Tamriel to explore, […]

New Mass Effect in the works

A long blog post from Yanick Roy, Studio Director at BioWare Montreal, gave a few more details about the new Mass Effect game that was announced to be in “early stages” just last week. One of the key points seems to be that the new Mass Effect will be built on DICE’s Frostbite technology, just […]

The bitzens are back in business with another handheld addi(c)tion from NimbleBit; Pocket Planes. A simple yet devilishly addictive little game for iPhones and iPads alike from the guys that stormed the scene with Tiny Tower in 2012. They clearly discovered that their charming bitzens and carrot-on-a-stick advancement was the key to our hearts, and […]

Read More
Posted by AngryMageFace in iOS. This post has No Comments.

Finally some news on Dragon Age! Only a few snippets of news but it’s definitely got me excited. Let’s start at the beginning – Dragon Age 3 has been announced, with the subtitle “Inquisition”. Followed up with a tasty first look at the games concept art. Now, BioWare has been exceptionally smart in releasing these […]